It's the evening of October 27th and the plows are rumbling away down route 7. Is it a sign of great things to come, or just an early winter tease?

Let's get some of the facts of today's snow out of the way. It is about two weeks ahead of schedule. Our first measurable snow usually falls around November 14. The snow arrived on time, but it lingered longer than we expected, which gave it time to coat the roads just enough to make them slow-going. Albany picked up 1.7 inches, and we had 1.2 inches at the GSD Home Office in Williamstown.

No, there will not be a delay tomorrow. Just no. No.

As for the onset of a terrible winter...cool your jets. Temperatures will return to normal by Saturday, which means plenty of days in the 50s. And we're even eyeing low 60s on Wednesday of next week. Beyond that, the forecast is for normal temperatures with slightly above average precipitation for the next three weeks or so.

Enjoy this glimpse of winter, but it may be a few weeks before we meet again.
at 7:02 PM No comments:

Things are looking good tomorrow that we'll see our first accumulating snow of the 2016-17 season! Northern Berkshire county will be the big winners tomorrow, with as much as 3-4 inches in higher elevations.

It is supposed to be cold enough--27 degrees for a low temperature tomorrow at daybreak for most of the county--to allow for snow to fall even at our lowest elevations. The roads will not be impacted in any significant way as it is just too warm still, but grassy areas could see an inch or two in spots. South County will see flakes but not much accumulation.

The one thing that could bump up our snow totals slightly is if the precipitation is heavy at the onset of it. The heavy precip tends to drag colder air down with it, which would mean the snow would fall for longer before the inevitable changeover to rain.

The snow window tomorrow looks like it will be between 10 AM and 2 PM with steady rain afterward.

So, no delays or early releases tomorrow, except for the slightest chance of a chance for a release up there on Florida Mountain.

Most after school practices and games will likely be cancelled or postponed tomorrow, but those decisions largely will depend on the heartiness/hardiness of the coach and the drainability of the field. Volleyball matches won't be affected, or at least they shouldn't be.

Yes, it's true. Snow is in the forecast this week. It looks like we could see some wet snow on the grass and roadways during the morning hours on Thursday. The snow will change over to rain around midday, but we could have another coating (an inch or so) similar to the ones the upper elevations experienced on Saturday evening. 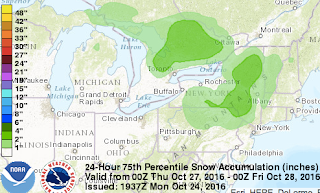 Will there be enough on the ground to cause delays on Thursday? It looks like the snow will fall starting around daybreak so it's highly unlikely, given the relative warmth of the roads.

But no one should be surprised to see snow on Thursday even in lower elevations. We'll have rain after that on Thursday and also on Friday.

The First Flakes of the Season!

Fall has arrived, and as is often the case around these parts, winter has followed closely behind. Our intrepid GSD Staff, checking out the fine foliage in Vermont, witnessed a steady wet snow in Manchester. We also are starting to see wet snow flakes mixed in with the rain in Northern Berkshire County this evening. Higher elevations will see steady snow showers tonight, which means Mt. Greylock will be snow-covered by morning.

There is an outside chance lower elevations could see some light accumulation on grassy surfaces in the overnight hours, but the roads should be fine for anyone who is out and about.

It won't be long before the words "delay" and "cancellation" start to creep into the GSD vernacular. Now, that's what we're talking about!

(And for a final non-winter weather announcement--watch out for the wind tomorrow. We have a Wind Advisory in effect throughout the night and most of the day tomorrow. A few spotty power outages are possible.)

We're Back! The Mid-October Long Range Forecast for Winter 16-17

It's that time of year again! The leaves they are a-changin'. The frost was on the mums this morning. And the GSD Staff is firing up their Apple IIEs and ready to process all the long-range forecast data and synthesize it into a thoroughly entertaining and eminently readable article that spells out how the winter of 16-17 is going to shake out.

Earlier in the year the El Nino period ended it's unclear whether a strong or weak La Nina will form. Latest indications, though, show that we will see a weak La Nina coming out of the Pacific. What does that even mean for us? Generally speaking, a La Nina pattern means a more northerly jet stream with more storms in the north and drier and warmer conditions in the south. But it's always more complicated than that.

But even a weak La Nina will give us more frequent snow events this winter than we had last winter. But that's not really saying much as any change to the pattern will increase our snow fall totals from last winter. We ended up with a miserly 12.58 inches at the GSD Home Office, which was quite simply unacceptable, Old Man Winter!


While we don't expect the Old Man to make amends completely for last year's weak performance, we do think we'll have a more moderate winter. Here's what we will see this year: We'll have a dry December, and then things will heat up in the eight-week period between January 15 and March 15. We're not ruling out a measurable snow event before Thanksgiving or before the December holiday period (i.e. full snow day), but most of our significant snow storms will strike us after the first of the year.

The GSD Staff forecasts between 40 and 60 inches of snow this winter. Even on the low end of that prediction, that's enough to see multiple snow days and/or delays for the good boys and girls of Berkshire County.

At the nonce we do not see any flakes in the forecast. Usually in the Berkshires we see a few flurries or snow showers by the end of October, but we might have to wait until November this year.

We'll update again soon once we see some of that frozen white gold in the forecast!
at 9:39 PM No comments: