Like everything else these days, May snowstorms are polarizing.

A good number of people around these parts are against May snowstorms. For them, it's spring so it's time to move on. Typically, these folks are the type that would love a two-foot snowstorm in March, but then once they turn the calendar to April, they don't want the temperature to drop below 70 until October.

Then there are those for whom any snow is good snow. Especially an unusual snow fall, like a May storm. They crave weather oddities and records broken, regardless of the harm done to daffodils and forsythia. Typically, these people love to talk about weather any old time of year, and this May storm is a nice opportunity to talk about something other than the C-word.

The official GSD position on these two camps is don't be a snow hypocrite. If you get all fired up for an October storm, then you should offer up that same energy for April and May storms. Your appreciation of snow should be calendarially symmetrical.

So...what's coming this weekend? Ultimately, probably not that much. Precipitation will roll in Friday afternoon and evening and get very interesting after midnight as a coastal storm potentially "bombs" out. Two things will occur. The precipitation will increase significantly and unseasonably cold air will get sucked down from the north and overspread New England. The rain will then turn to wet snow.

Elevation will play a critical role with this storm (as is the case for late winter and spring storms). Higher terrains could see 3-4 inches of very wet snow. Valley locations will likely see 1-2 inches of snow that mostly just covers the grass. Snow should stop falling by midday on Saturday.

Our suggestion is that you keep the shovel handy just in case this storm packs a little more punch than will be advertised the next few days. While this storm will probably end up being more of a nuisance snow than a major event, there is definitely the possibility for damage to yard plants and trees.

We hesitate to do this, but we're going to show you the Euro model for this storm. Don't start spreading this image all over the internet as it's a VERY aggressive forecast at the moment and most meteorologists thinks it's running a little hot. We probably won't get 5" for most of Berkshire County.

We'll update tomorrow and/or Friday if we see any big changes to total snow forecasts.

Just so you're informed--and just for our records--we have been upgraded from a Winter Weather Advisory to a Winter Storm Warning. New England lives up to its reputation. 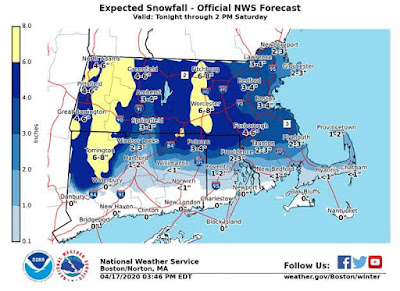 We're now expecting 4-8 inches for the County. Roads will definitely get slick if this storm pans out, so be prepared for slow travel tomorrow morning. But should you really be going anywhere anyway?

Looks like the weekend yard work will have to wait for another week.

This oddly inverted winter continues as we prepare for our third (minor) April snow event heading into the weekend.

From Wednesday night's disturbance, we measured a fairly robust 2.75 inches at the GSD Home Office. The snow flakes must have been fairly large--the staff was sound asleep when it came down--and there was no wind so that allowed the snow to pile up easily on grassy surfaces. 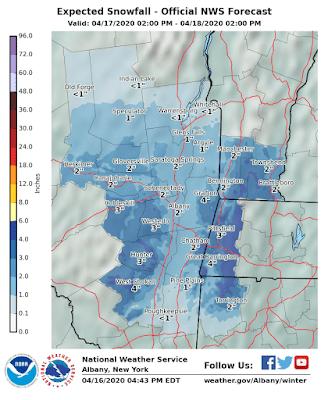 And it looks like tomorrow night we'll experience an almost identical scenario. Some of the models have us in the 4-6" range for tomorrow night into Saturday, but more realistically we'll see 2-4 inches of fluffy, sticky snow, with higher totals on the east-facing slopes.


The snow will take longer to melt on Saturday, as clouds will persist throughout the day, but it will all be gone by noon on Sunday.

There is great snowperson-building potential on Saturday, as well as a chance for some sledding. We encourage you to take advantage of the opportunity as we really think--and we mean it this time--that this is the final measurable snow of the season.

We thought we were finished for the year, but we kept one computer going in the GSD Home Office just in case. And sure enough, the snow alarm went off earlier this afternoon, announcing a chance for measurable snow by morning. 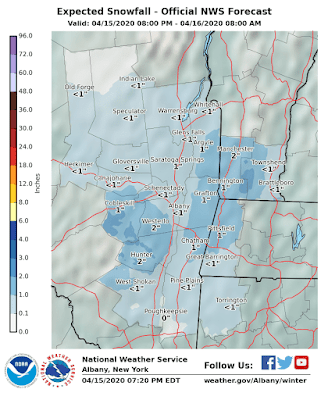 It won't be a lot--maybe an inch--and most of us will be asleep when it falls, but we could wake up to a winter wonderland tomorrow in the Berkshires. With temps expected to drop into the high 20s tonight, and a big swath of precipitation moving in from western New York after midnight, we expect grassy surfaces will have at least a coating by tomorrow morning.

Because the sun is much stronger in April, the snow should melt by the afternoon. And the day should be sunny and slightly warmer than today, which felt rather brisk.