In the wee hours on Thursday, NWS Albany has decided to go with a Winter Storm Warning for Northern Berkshire county and a Winter Weather Advisory for denizens south of Pittsfield. These severe weather alerts go into effect at 8 PM this evening. 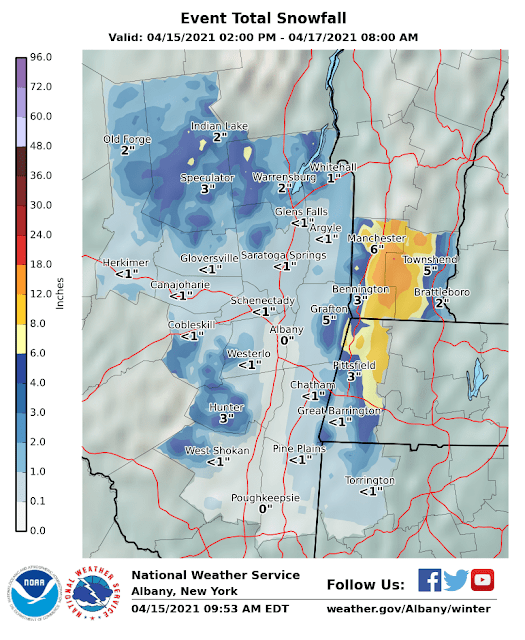 As we indicated earlier in the week, we're not confident about the cold air. But the models are keeping us from fully downplaying the potential severity of this storm. The Euro is now trending upward with its snow prediction (8-10") for the county, and the North American models continue to show off-the-charts snow totals--9-12 inches south and 16-20 inches north. Yes, the models are often wrong, but even if we get half of what the conservative Euro model is predicting, we're still in for a moderate to heavy snowfall.

But given that this storm is elevation dependent, here's what we are projecting could happen:

*Schools in the northeast corner of the county--Emma Miller in Savoy, Gabriel Abbott in Florida, Rowe Elementary, Clarksburg, Hoosac Valley schools, maybe North Adams--could have to go fully remote or could call a snow day. 60% chance.

*Central Berkshire has a good chance of a snow day or remote day because of its district's hill towns. 60%.

*Mount Greylock has a lesser chance but the stretch of route 7 around Brodie Mountain will likely be hazardous at some point early Friday. 50%.

*From Pittsfield south, it's probable that snow will accumulate on grassy surfaces and dirt roads but not on paved roads, thus chances of snow or remote days will be limited for those schools. Delays would be a more likely scenario, but we'll have to keep an eye on Farmington River as the elevation there could lead to deeper snow totals. 10% chance for snow days; 40% chance for delays.

It's a spring storm, so all of this snow talk could be for naught and be a washout. Regardless of what happens, we need the precipitation. If you happen to get a snow day out of it, then that will be nice pre-vacation gift from Mother Nature.