With light flurries falling at the GSD Home Office in Williamstown this afternoon, it's time for this week's snowcast.

And we do have some snow to forecast.

First up is a minor disturbance for Thursday into Friday. It's a clipper system, which means it won't be a big snow maker and there's some doubt it will even fall as snow. But we could see another inch of slush in the valleys and a few inches in the higher elevations. Given the possibility of rain and the low amount of moisture, we don't think the school day will be shortened on Friday.

Next up is a potentially bigger event for Monday. The models are showing a more substantial storm in the south that could move up the coast, intensifying along the way. There's an even-money chance that the storm goes out sea or goes further inland, but some of the model runs want to bring it up the coast. This would yield a nor'easter, and we know what that means for our neck of the woods.

Whether we get snow or not, these two potential snow storms show that we're in an active pattern. It certainly feels as if we'll get at least one snow day before December holiday break, and let's all hope it's next Monday.

Outlook For Delays on Monday

Generally speaking, yesterday's storm was an over-performer and got the winter of 2021-22 off on the right foot.

We ended up with 5-8 inches in the county with a few higher elevation towns into double digits. Had this storm fallen on a school night, we would have seen delays instead of full snow days as the bulk of the snow wrapped up shortly after midnight. 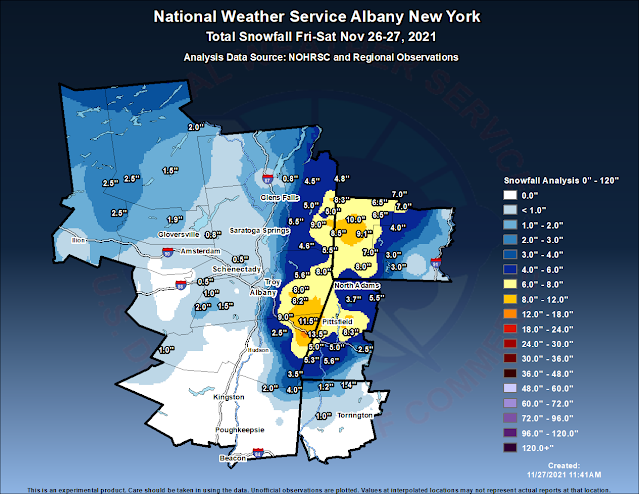 The good news is that more snow is on the way. The bad news is that there isn't much energy associated with the next storm. The last few runs of the models suggest we'll only get half an inch to 2 inches of snow. The timing is good--it will start around midnight Sunday--but the snow will probably stop falling by daybreak.

Just for fun, we will indicate a small chance for a delay or two on Monday on the ol' Confidence Meter, but it's more likely that all students will have a full day of school on our return from Thanksgiving break.

As for our next big weather maker, not much is in the offing this week coming up, but we are keeping an eye on a moderate rain/snow event for Monday, December 6.

The 1st Winter Weather Advisory of the Season

The National Weather Service has issued a Winter Weather Advisory for Northern Berkshire county. Pittsfield and towns north should see an inch or two of snow later today, with higher elevation towns picking up 3-6" of snow. And anyone who lives above 1500' feet could easily see double digit snow totals by Saturday morning.

Most of us in the county experienced some rain early this morning (5-6 AM), and there will be a pause in the action before the rain begins again and starts to transition to wet snow as the temps slowly start to decrease throughout the day. It does not take a trained meteorologist to tell you that as the temps go down, the relative dryness of the snow starts to go up. Folks in the valleys will mostly see a heavy slushy snow, while those in the hill towns will gradually transition to higher quality snow.

In terms of travel today, the worst time would be between noon and 9 PM, unless of course you are driving south or east. Those areas should stay all rain, or if does snow there, it will not accumulate on most roads because the ground is still above freezing.

As for Sunday night's storm, the models are less optimistic about the storm redeveloping off the coast close enough for moderate snow. The Berkshires should still get some snow, but it will only be nuisance level snow of 1-2". Things are still fluid, as they say, and the projected timing is such that the morning commute could still be impacted.

Today could be tricky; be prepared for slow travel later today.